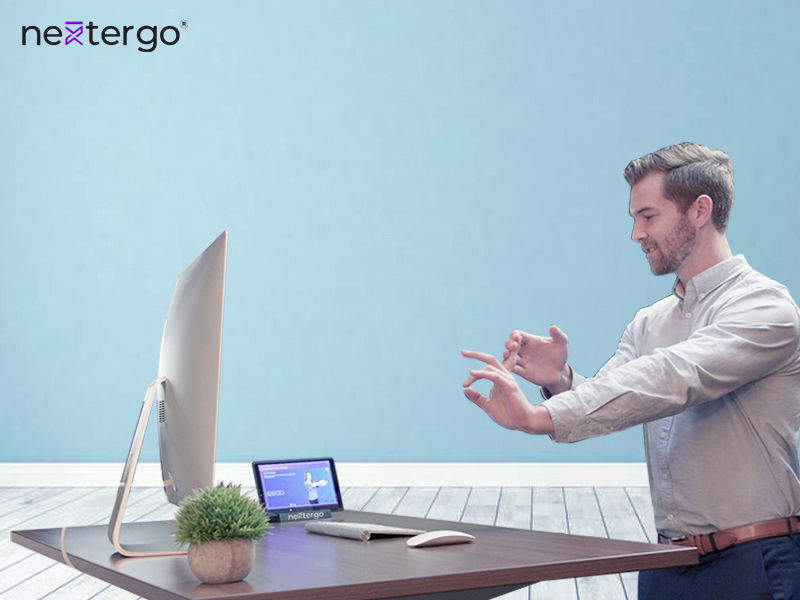 The nature of work in different firms is constantly changing thus raising the need to change the work lifestyle as well.  Ever felt totally drained after having a long flight, car ride, or simply by just spending the entire day sitting on a desk? Even though you may not have carried out any tedious tasks, it’s normal to feel exhausted after prolonged hours of sitting. Americans alongside office workers in other states on average spend about 8 hours sitting. Such long duration of sitting has been associated with many detrimental effects on wellness. Hence, NextErgo among other Ergonomics furniture suppliers is selling AI Standing Desks with an aim of mitigating such negative side effects. This read will give you an insight into how this is achieved

The main aim of NextErgo in designing height-adjustable  AI Standing Desks is to enable employees to constantly switch between sitting and standing. Preferably, the time spent while standing should be longer than the sitting durations. Reliable sources have shown that standing is the most effective way of reducing weight. This is beneficial because office workers are no longer victims of weight-related diseases including obesity, poor circulation of blood hence leading to cardiac arrest & other heart diseases,  diabetes, chronic diseases, and so on.

Reduces cases of depression and anxiety :

Psychological well-being is among the most effective ways of improving performance among workers. As a matter of fact, most office workers who end up performing poorly are full of thoughts. Cumulatively, these thoughts lead to depression and anxiety. Besides being height adjustable, NextErgo’s AI Standing Desks have inbuilt desk Exercises that enable the desk occupant to keep exercising amidst executing the office tasks.

Reduces chronic back and neck pain :

NextErgo’s AI Standing Desks have been designed with a considerably wide height coverage. This makes it possible for every user to make the necessary adjustments based on their physical metrics. While some people prefer having a high desktop surface to avoid bending, this is not so for short people. The option of adjusting the height of the desk surface makes it possible for you to effortlessly avoid straining your neck and back.   Previous research has shown that the cases of chronic pain on the back and neck have reduced by 43% since the introduction of the ergonomics concept.

Type 2 Diabetes mostly results from increased consumption of calories as compared to the levels of energy being consumed. These increased sugar levels are dangerous for the body and commonly lead to diabetes. Fortunately, NextErgo’s guiding principle when it comes to manufacturing AI Standing Desks is to increase the levels of calories burnt in the body through increasing the body metabolism rates. Eventually, office workers end up with just enough energy repositories in the body.

For many years before the concept of Ergonomics was introduced into the office industry, many employees suffered from physical injuries and fatigue as a result of prolonged sitting durations. This in return led to increased cases of musculoskeletal disorders and many downtimes. In an attempt to reduce such cases, NextErgo started distributing their Ergonomic furniture from Plano, Texas, and more varieties of smart desks globally through their StarErgo platform. Indeed, many buyers who have transitioned to using smart desks have experienced reduced downtimes due to physics injuries and also increased productivity.

The culture of frequently switching between sitting and standing has proven to have remarkable impacts in reducing chronic neck and back pains as well as strengthening body muscles. The presence detector in NextErgo’s smart desks helps in correcting the office desks occupants posture. Technically, it detects the eye level as well as the body thus giving an instruction to the office worker on how to adopt the correct posture.

In a nutshell, NextErgo’s AI Standing Desks, have numerous health-related benefits including reducing the risks of increased weight gain and obesity, lowering the sugar levels, lowers the potential risks of heart diseases, reduces chronic back pain and neck pain and boosts the overall energy and mood of office workers. No wonder the culture of switching to ergonomic furniture has become so popular. If you still haven’t advanced to using ergonomic furniture, you can easily achieve that by contacting NextErgo’s team of experts for quality furniture.